Ukraine War: The family slept in homes of locals at night and moved on against all odds during the day.

As Russian bombardments devastated their hometown of Mariupol, Yevgen and Tetiana decided they had only one way to escape with their four children: on foot.

Talking Friday to AFP in the Ukrainian city of Zaporizhzhia as they waited for a train westwards, the family recounted through tears and laughter their miraculous 125-kilometre (80-mile) trek to safety.

For weeks as the bombing laid waste to Mariupol, the parents tried to prepare their children Yulia, 6, Oleksandr, 8, Anna, 10, and Ivan, 12, for the perilous journey they faced.

“We explained to them for two months, while we were in the cellar, where we would go… We prepared them for this long journey,” said Tetiana Komisarova, 40.

“They saw it as an adventure.”

Last Sunday, together with her husband Yevgen Tishchenko, a 37-year-old technician, they finally thought the time had come to make their move.

Nervously, they led the children out of their building. It was the first time they had all left together since the Russian invasion began on February 24. Around them they found a terrifying scene of utter destruction.

“When the kids saw, they walked in silence,” Yevgen said.

“I don’t know what was going on in their heads. Maybe they too couldn’t believe that our city no longer existed.”

The adults already had a sense of what awaited them. They had snuck out of the house to take food and water from bombed out shops and been confronted by the corpses littering the streets.

“It seemed less frightening to die in a bombing raid than of hunger,” said Tetiana.

A shell had hit the roof of their apartment block and For the children life had been lived entirely underground.

“We brought them books in the basement. The light was so dim that I could hardly see, but they managed to read,” Tetiana said.

“Sleeping on the concrete was not great,” recalled the ponytailed girl.

She insisted bravely that when the bombs fell “we weren’t so scared”.

“The building was shaking a lot and there was a lot of dust,” she said. “It was not pleasant to breathe.”

Finally leaving the basement and the city was “hard”, said Anna.

“We had to carry our bags and they were heavy,” she told AFP.

That was on the first day, at least, before her dad discovered what the family christened “the golden cart.”

In reality, it was a rusted and creaking three-wheeled trolley — but it made the walk much easier.

“My wife pushed our youngest girl on her tricycle. And I pushed the cart, often with one of the children perched on the bags,” Yevgen said. “The other two walked beside me.”

In five days and four nights of travel, the family passed through numerous Russian checkpoints, telling the soldiers that they were heading to their relatives. 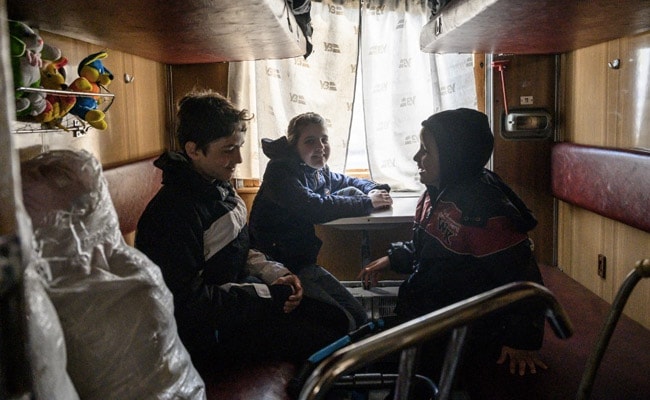 “They didn’t treat us as enemies, they tried to help,” Yevgen said.

“But every time they asked us: ‘Where are you from? From Mariupol? But why are you going in this direction, why aren’t you going to Russia?'”

At night, the family slept in the homes of local people who opened their doors along the route and were well fed.

During the day, they moved on, against all odds.

Eventually they got lucky and came across Dmytro Zhirnikov, who was driving through Polohy, a Russian-occupied town located about 100 kilometres from Zaporizhzhia.

“I saw this family pushing a cart on the side of the road,” said Zhirnikov, who regularly travels Zaporizhzhia to sell the vegetables his family produces.

“I stopped and told them to put their things in my trailer.”

After 125 kilometres on foot, Tetiana, Yevgen, and their little ones finished their journey in his battered van.

Zhirnikov remembered the elation they felt when they emerged from Russian-controlled territory and saw Ukrainian soldiers.

“When we passed the first checkpoint, everyone started crying,” he said.

“We had just one goal: that our children could live in Ukraine. They are Ukrainians, we can’t imagine that they could live in another country,” Tetiana insisted.

On Friday, the family crammed themselves and their meagre possessions into a crowded train heading for the western city of Lviv.

They then plan to move to Ivano-Frankivsk, another large city in western Ukraine, to try to rebuild a normal life.

“I want to find a job. My wife will take care of the children and try to find them a school,” Yevgen said.

“We can never forget what we have been through. We must not. But we must keep our spirits up and raise our little ones.”

Their daughter Anna described her own simple wishes after escaping the hell of Mariupol.

“I want to live in a city that is not like that,” she said. “And in Ukraine.”

(Except for the headline, this story has not been edited by NDTV staff and is published from a syndicated feed.)