The prosecution called the POST Board chair, a bystander who witnessed Floyd’s death and an FBI special agent who reviewed video from the case to testify Friday.

The third full week of testimony in the federal trial for three ex-Minneapolis police officers wrapped up Friday after prosecutors called three new witnesses to the stand. Tou Thao, J. Alexander Kueng and Thomas Lane are all on trial for violating George Floyd’s civil rights on the day of his death, May 25, 2020. Thao and Kueng face an additional charge for failing to step in to stop Chauvin on that night . According to KARE 11 reporter Lou Raguse, who was inside the courtroom Friday, the prosecution will rest its case on Monday.

The first witness to testify was Mendota Heights Police Chief Kelly McCarthy, who is the chair of the Peace Officer Standards and Training (POST) Board, the regulatory agency for licensing police officers in Minnesota. Chief McCarthy reviewed the standards and training officers need in order to become licensed in the state requirements, including a Professional Peace Officer Education (PPOE) Program. She confirmed that “duty to intervene” was one of the core learning objectives in Lane and Kueng’s in PPOE programs and tested that Tou Thao and Derek Chauvin met in-service requirements, or continued education requirements, for each year they were licensed.

The second witness was Alyssa Funari, a bystander who saw George Floyd’s murder. Funari recorded videos from the scene of that show Derek Chauvin holding his knee on Floyd’s neck. During cross examination, Tou Thao’s attorney Robert Paule pointed out that Thao had his back to Floyd and was dealing with a crowd of bystanders. When asked by Paule if it was fair to say that Thao wasn’t always aware of what was happening behind him, Funari disagreed and said he could hear it.

The third and final witness was FBI Special Agent Matthew Vogel, who, as part of the investigation, reviewed video from the case and created a timeline based on body-worn camera video and transcripts. Prosecutor LeAnn Bell played multiple clips from the officers’ body camera videos, and at one point the defense objected to the repetitive nature of the evidence.

Following the afternoon break, Bell continued to review the timeline created by Vogel. The prosecution played video from Tou Thao’s body camera of a conversation the four officers had with now-retired Minneapolis Sgt. David Pleoger, who arrived at the scene after Floyd was taken away in the ambulance. After watching the video, Vogel agreed that at no point did Thao or Derek Chauvin speak during the conversation with Sgt. Plugger, and none of the officers said anything about Chauvin keeping his knee on Floyd’s neck, Floyd going unconscious or not finding a pulse.

On cross-examination, Vogel greed with Kueng’s attorney Thomas Plunket that Kueng probably couldn’t see the crowd gathering outside Cup Foods since he was behind the squad car.

Thomas Lane’s attorney Earl Gray made a point to show that Lane volunteered to ride in the ambulance and helped EMT’s with CPR on George Floyd.

Finally, during questioning by Tou Thao’s attorney Robert Paule, Vogel agreed it might be true that the things he characterized on the timeline as most important might not be the same things the defense thinks are most important.

After the break, the state reviewed the timeline of George Floyd’s arrest and death created by FBI Special Agent Matthew Vogel using body camera video from the three officers and transcripts. The prosecution played a longer clip of Tou Thao’s body-worn camera video, where Derek Chauvin, Thomas Lane and J. Alexander Kueng can be seen working to restrain Floyd on the ground. In the video, Thao goes into Lane’s duty bag to retrieve a hobble restraint, but the officers did not to use it. Derek Chauvin said they’d wait for the ambulance instead, as heard and seen in the video and transcript. Prosecutors also played clip from Thomas Lane’s body-worn camera video, where Lane asked if they should roll George Floyd to his side and said he was worried about excited delirium.

Defense attorneys made several objectives during the prosecution’s line of questioning about playing the body camera videos multiple times.

The prosecution’s third witness Friday was FBI Special Agent Matthew Vogel, who works with the violent crimes squad at the FBI. Vogel reviewed footage from the body-worn cameras from each officer on the day George Floyd died. Prosecutor LeeAnn Bell started to review timelines Vogel made of the events surrounding George Floyd’s death, using that body camera footage, before breaking for lunch.

The second witness called by the prosecution Friday was 19-year-old Alyssa Funari, who was one of the bystanders that witness George Floyd’s death. Funari, who was 17 years old at the time and lived in the area of ​​38th and Chicago, , was driving to Cup Foods with a friend on May 25, 2020. After parking the car and getting out, Funari took three videos which showed Derek Chauvin holding his knee on Floyd’s neck.

Funari told jurors she saw one officer take George Floyd’s pulse twice, which would have been either Thomas Lane or J. Alexander Kueng, but said she didn’t see officers provide any other medical assistance.

In the video’s George Floyd was heard saying “I can’t breathe.” When asked to describe Floyd’s medical condition by the state, Funari told the courtroom that Floyd slowly became less vocal, closed his eyes and wasn’t able to speak.

During cross examination, Thao’s attorney focused on where exactly Thao stood; that he was facing the people on the sidewalk. Funari testified the officers were behind Thao, adding, “He might not have been watching the whole time but he knew what was going on.”

During the cross examination, Tou Thao’s attorney Robert Paule asked Funari several questions about Thao’s position in the video. He pointed out that Thao had his back to Floyd and was dealing with a crowd of bystanders, which Funari described as getting louder and more desperate. When asked by Paule if it was fair to say that Thao wasn’t always aware of what was happening behind him, Funari disagreed and said he could hear it.

The first witness called by the prosecution Friday was Chief Kelly McCarthy of the Mendota Heights Police Department. McCarthy is chair of the Peace Officer Standards and Training (POST) Board, which is the regulatory agency for licensing police officers in the state of Minnesota.

Chief McCarthy reviewed the standards and training potential officers need in order to become licensed in the state, including a Professional Peace Officer Education (POE) Program. During her testimony, McCarthy explained that in PPOE, potential officers are taught “once someone is in your custody, they are in your care.”

McCarthy explained that “duty to intervene” is one of the more than 400 learning objectives officers learn in the PPOE program. “You have an obligation not only to ensure that citizens are acting appropriately, but also that your officers and other government officials are acting in a legal, ethical and moral way,” she testified.

The chief confirmed that “duty to intervene” was one of the core learning objectives when Lane and Kueng were in their PPOE programs. McCarthy also testedified that Tou Thao and Derek Chauvin met in-service requirements, or continued education requirements, for each year they were licensed.

McCarthy said she is the chair of Peace Officer Standards and Training, where the Duty to Intervene is a core learning objective. She testified that the former officers were all POST-certified.

KARE 11’s Lou Raguse, who’s been covering the trial since it started, said it’s possible the prosecution could rest its case on Friday or Monday, and the jury could possibly begin deliberating sometime next week.

I waited for the pool note to confirm i heard correctly, but it sounds like a chance the prosecution could rest tomorrow. They have five witnesses left. I’d be Monday is more likely. I don’t know how many days the defense will go but jury could have this sometime next week.

RELATED: Who is on the jury for the federal trial of three former Minneapolis police officers?

Gray focused his questioning on pills found on the floor of a Minneapolis police squad car that Anderson and her team failed to collect during a first search warrant after George Floyd’s death on May 25. She told Gray she did see drugs in the squad in photos, and during a search of the vehicle she seized a shoe, a black strap and sampled a blood stain.

Anderson said she did collect the pills at a later time, and that they had Floyd’s saliva DNA.

MPD Ltd. Richard Zimmerman then testified about the Minneapolis Police Department’s “duty to intervene” policy, and how he believes it applies to all officers, saying there’s no “minimum time on the job” that exempts officers from abiding.

Zimmerman told the jurors he believed he was responding to a “critical incident” when he was instructed to go to 38th Street and Chicago Avenue, which he described as knowing a life might be in jeopardy and police may have been involved.

After a break, Zimmerman continued his testimony and said he was not told about key details surrounding Floyd’s death, including how Derek Chauvin put his knee on his neck.

Zimmerman went on to tell the court that he believes the officers should have intervened, stopping Chauvin from pressing his knee onto Floyd’s neck.

When asked about the presence of bystanders in the videos he later watched, Zimmerman told the court that it looked at him like the people in the crowd were trying to help Floyd and did not pose a threat to the officers.

RELATED: ‘We all wear the same badge’: MPD lieutenant testifies officers had a ‘duty to intervene’ at the federal trial 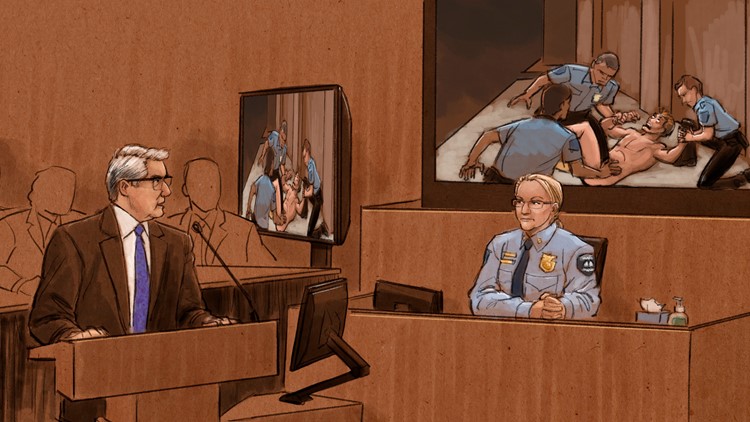 Bill to drop 11th-grade NJGPA as a graduation requirements advances