On March 8, after nearly two weeks of intense Russian bombing, a humanitarian “green corridor” was established in the Ukrainian city of Sumy, allowing the civilians trapped inside to flee to safety. But within just a few short hours, Russian forces violated the negotiated ceasefire, halting the evacuation.

Undeterred, Elizaveta Sherstuk, the head of Sumy’s Jewish community center, set to work to get the most vulnerable members of her community out.

“We managed to evacuate 150 people, mostly the elderly women, and children. The distance would normally take us three-four hours. It took us seven hours because there was so much traffic. We were lucky that there was a Red Cross column that accompanied it and we managed to join them and security helped us leave the town,” Sherstuk told The Times of Israel through a translator.

Dozens more were surrounding evacuated from Sumy and area via buses organized Sherstuk, who has been involved in Jewish communal life in her hometown since 1999 through the Chessed Chaim aid center, which is funded by the American Jewish Joint Dis Committee.

Two weeks ago, she was decided to be one of the 12 people to light a torch at the national ceremony making the start of Israel’s Independence Day. Sherstuk will represent the Jewish Diaspora. She was nominated by Diaspora Minister Nachman Shai and approved by Culture Minister Chili Tropper.

“We decided to recommend Elizaveta, not only because of her work as an individual but also because she represents the JDC and the many Jewish and Israeli organizations which have worked to help the Ukrainian people and the Jewish community in Ukraine during this war,” Shai said.

Sherstuk spoke to The Times of Israel shortly after landing in Israel, where she will spend the next two weeks. In addition to participating in the official state Independence Day ceremony, Sherstuk will visit her daughter and granddaughter as well as her sister, who all live in Israel. She’ll also meet with local organizations and donors before heading back to Ukraine.

“I’ve been having quite a busy schedule. Lots of important meetings. Also, I have a lot of family and friends here, and I want to see them all because I don’t know when I’ll next have an opportunity to come to Israel,” she said.

“I don’t plan to come here again until after the war is over. So I want to make the best use of my time here that I have.”

Sherstuk gets a glimmer in her eyes when she recalls getting the phone call from Tropper and Shai telling her that she had been chosen to light one of the 12 torches on Independence Day.

“I got this call and I was astonished, I was speechless. My husband and my son, they didn’t even realize that this could happen, that this is happening to me, to their wife, to their mother. It was like an avalanche of emotion,” she said.

To Sherstuk, the honor is not only a vindication of her work but also a clear sign of support and solidarity from the Israeli government to Ukraine and the Jews of Ukraine.

Elizaveta Sherstuk (middle row, farthest right) and the other people decided to light torches to mark the start of Independence Day pose for a photograph with Culture Minister Chili Tropper, center-left, and Prime Minister Naftali Bennett, center-right, on May 2, 2022. (Amos Ben-Gershon/GPO)

“They care about us, they are helping us, and they know what is going on. We are not alone. I felt all of that, and I thought about it all when I discovered that I had been decided,” Sherstuk said.

“This is the acknowledgment of the importance of what we do,” she added.

Located some 25 kilometers from the border with Russia, Sumy was one of the first cities to come under attack when Moscow launched its invasion of Ukraine on February 24.

“Some areas of the city have been completely destroyed. We have lost some members of the Jewish community,” she said.

“Currently we are free of Russian forces, but they are standing on the border,” she added.

In non-war times, her organization works with elderly members of the Jewish community and puts together cultural and educational events for children and teenagers to make them feel connected to their religion. According to Sherstuk, the Jewish community of the city of Sumy comprises some 400 people, while another 600 or so live in the surrounding area.

When war broke out, the organization’s central focus shifted. “We try to help the Jews survive and stay safe,” Sherstuk said.

Sherstuk’s Chessed Chaim organization continued its operations throughout the bombardments, sending social workers to elderly residents’ homes and distributing aid as the situation grew dire in the war-torn city. 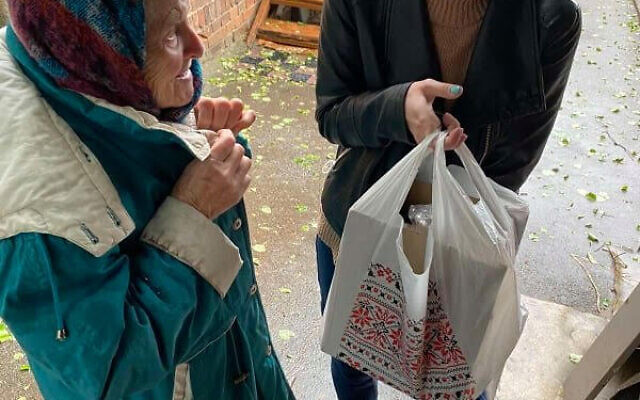 “We helped the most sensitive people, people who can’t leave their house, people who can’t get out of bed. Approximately a week after the start of the war, stores were empty, there was no food or drink. We were forced to look for an opportunity to feed our community. We tried everything and we succeeded to get some food and help some people,” she said.

Looking for a silver lining, Sherstuk said that her organization had been well-prepared to help people and hold events for those taking shelter at home. “At least COVID-19 taught us to work remotely,” she smirked.

But Sherstuk, a music teacher by training, said that as important as the humanitarian aid her organization distributes is, no less crucial is the “spiritual support” it provides to the members of her community.

“When it was really scary, when we were bombed and we couldn’t leave the shelters, there was one night that was terrible. Sumy was bombed from the air and one of the streets was completely destroyed and children died there, whole families died there,” Sherstuk recalled.

“It was the middle of the night and everyone was awake in the shelters, and I received a message on Telegram from a young 19-year-old girl who said, ‘Let’s sing together.’ So we sang and we cried, but we knew that we were alive and that we could support each other,” she said, wiping a tear from her eye. 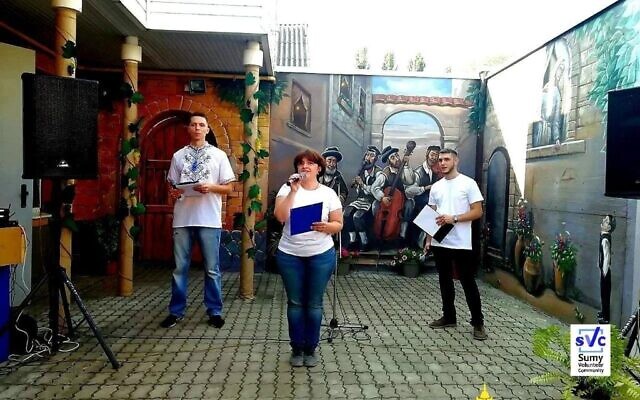 Elizaveta Sherstuk, director of a Ukrainian Jewish organization in the town of Sumy, who is one of 12 people decided to light torches to mark the start of Independence Day, sings a song at an event, in an undated photograph. (Jewish Community of Sumy)

“I understood then that people don’t only need food. They need spiritual support too.”

Since then, her organization has continued to hold cultural events online, with opportunities for members of her community to speak to each other and to sing together, she said.

In addition to helping organize the daring escape on March 9, Sherstuk has since arranged a number of other evacuation operations from her region.

“We managed to evacuate people to Germany under a medical evacuation program and we are doing the same to Israel,” she said.

Some of those who left are back already, she said, but others will likely permanently resettle elsewhere — in western Ukraine, Europe or Israel. 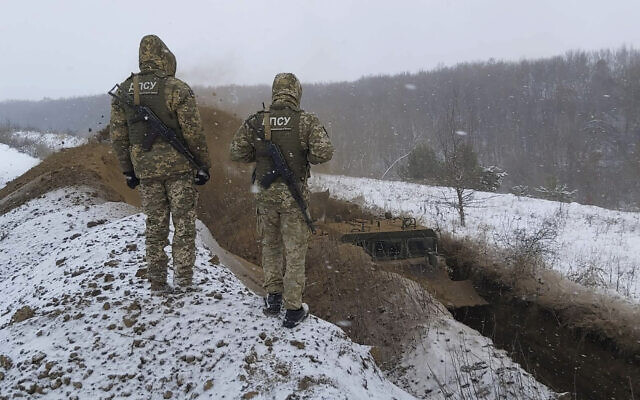 Sherstuk’s organization continues to help the members of the Jewish community who stayed behind.

“Currently, we provide support to about 200 people in Sumy and more than 450 in the whole district in total,” she said.

Asked why those hundreds of people chose to stay behind in the face of Russian bombings, Sherstuk said it was an impossible personal decision.

When I told them I was in a safe place, they cried because of how worried they were. But they couldn’t insist on me leaving earlier because they understand I have to stay and help these people

Sherstuk left Sumy in the initial evacuation on March 9, moving to a safer location in western Ukraine, from which she continued to manage her organization’s activities.

Her decision to stay in Ukraine throughout the war has been difficult for her family in Israel.

“They’ve been very worried. We stayed during the hardest bombings, and when we left with the people who were evacuating, they calmed down a bit. But they were very, very worried,” Sherstuk said.

“When I told them I was in a safe place, they cried because of how worried they were. But they couldn’t insist on me leaving earlier because they understand I have to stay and help these people,” she said. 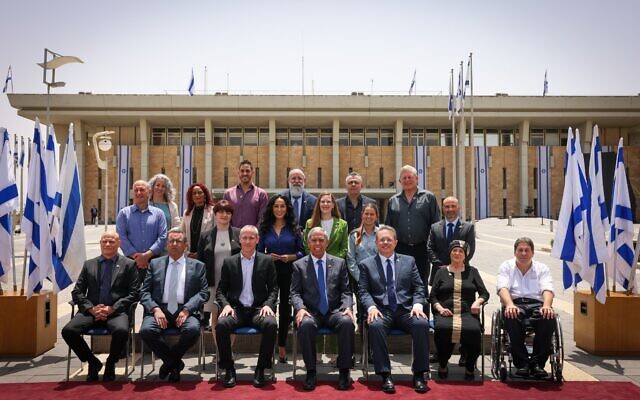 Elizaveta Sherstuk (middle row, second from left) and the other people decided to light torches to mark the start of Independence Day pose for a photograph in front of the Knesset on May 2, 2022. (Knesset)

When she returns to Ukraine next week, Sherstuk plans to make her way back to Sumy despite the risks of being so close to the border.