Recently published research indicates that autistic adults are at a disadvantage when accessing healthcare, and that this is contributing to alarmingly high rates of serious illness and early death in this group. Untreated mental illness is reported in 69 per cent of the group surveyed and untreated physical illness in 63 per cent. Use of emergency departments is double that of the control group, with autistic people three times as likely to be admitted after consultation, and twice as likely to die after admission.

The research was conducted by Autistic Doctors International (ADI), a group founded by Dr Mary Dohertyconsultant anaesthetist at Our Lady’s Hospital, Navan, in response to issues that are commonly raised by autistic adults. The issues are well-known, but the scale of the problem has been highlighted by this research for the first time.

“Before conducting this research we knew that autistic people faced barriers accessing healthcare, but we didn’t expect to find that using the phone was such a huge factor, or that one in three autistic respondents had been unable to access healthcare for a potentially life -threatening condition.”

The research shows, also for the first time, that there is no difference between difficulties reported by those with a formal diagnosis and those who have self-identified as autistic. This is important because there is currently no path to diagnosis within the Irish public health system.

Private clinics are expensive and, since there is no automatic referral for support services following diagnosis, many people feel there is little point in pursuing a formal diagnosis. Current estimates put the autistic proportion of the population at 1-2 per cent, but the real figure could be higher for this reason.

Another author of the research, Dr Sebastian Shaw of Brighton and Sussex Medical School in the UK, said: “For me, there were two really important findings here. Firstly, the overall study validates 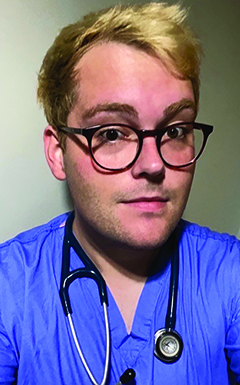 the struggles that autistic people can face every day when trying to access healthcare. The comparison to non-autistic respondents helped to highlight this stark difference in many places. Secondly, our finding of no significant differences between those self-identifying as autistic and those reporting a formal diagnosis is highly important.

“Seeking a formal diagnosis can be difficult. Following referral, it can take many years to be seen for an autism diagnostic assessment as an adult. For this reason, many pay for private assessments, which creates a socio-economic disparity in terms of those who receive the label and subsequent support. Our study therefore validates the experiences of those who have not yet received a formal diagnosis. To my mind, this is a vital finding.”

One of the most surprising findings was that 80 per cent of autistic adults reported difficulty visiting a GP, generally considered the first port of call for medical issues. This is in contrast to 37 per cent of non-autistic adults. Reasons given for this difficulty included: inability to use the telephone to book appointments; not feeling understood; difficulty communicating with doctors; sensory overload, and organisational issues.

Many healthcare professionals have never received training in autism, and few have an understanding of the specific issues autistic people face. GPs tend to underestimate the number of autistic patients in their practice, and the severity of disability caused by autism. Only a minority feel confident Communicating with autistic patients or identifying or making the necessary adjustments.

Dr Doherty wants to see greater recognition and awareness of the needs of the autistic community in healthcare.

“Potentially large numbers of Irish autistic adults, many undiagnosed, are significant facing challenges accessing basic healthcare, and likely to experience increased morbidity and mortality, yet outside of intellectual disability services, they are largely invisible in Irish healthcare,” she said.

Autistic people have increased rates of physical and mental illness, leading to reduced life expectancy, yet they nearly invisible within the healthcare system.

“We urgently need autism training for all healthcare providers, and to develop diagnostic and support services for autistic adults as part of our public health system. It is deeply concerning that a condition with such profound health impacts currently receives no funding or provision in primary care , secondary care, or social services. Members of our study team are carrying out research into the training needs of GPs and developing training which will be designed and delivered by autistic GPs.”

This research began with a project in Clonakilty in 2018 which saw AsIAm, Ireland’s national autism charity, team up with Supervalu and local businesses to make the west Cork location Ireland’s first ‘autism-friendly’ town. As a part of this project, Dr Doherty provided autism awareness training to local healthcare providers. In order to inform and develop this training, Dr Doherty began a pilot project at Autscape, an annual conference in the UK run by and for autistic people, where she asked a simple question of participants: “ What do you wish your GP knew about autism?”.

The sheer volume of responses to this simple question led Dr Doherty to conclude that the issue of access was probably a major contributing factor to the reduced life expectancy (between 16 and 24 years) and higher rates of mental illness that have been recorded in the autistic community, and that further research should be undertaken to assess the scale of the problem.

There is no medical reason for this difference. Autism is not a disease, and autistic people are not patients unless they are sick, but a general lack of awareness of the condition makes it difficult for autistic people to request and obtain the reasonable accommodations that would make healthcare accessible.

Key findings in the report include: Untreated mental illness was reported by 69 per cent; Untreated physical illness was reported by 63 per cent; 36 per cent required more extensive treatment or surgery than if they had attended sooner; 34 per cent had an untreated potentially serious or life-threatening condition; 59 per cent reported difficulty communicating during a consultation; 60 per cent were told they should have attended sooner; 47 per cent did not attend specialist referral.
All above results were significantly different to the non-autistic group.

Notes
This research has been published in the British Medical Journal. https://bmjopen.bmj.com/content/12/2/e056904a.