Drea Vail took up digital art just six years ago, when she was diagnosed with Type 1 diabetes.

“Before my diagnosis, my thing was sports and being really active,” says the artist, still a passionate fan of Colorado sports teams. “A lot of activity you do messes with your blood sugar level, and it got to the point where I was like, ‘I don’t know why I’m pushing myself to do these things that make me feel terrible all the time.”

In need of a way to express herself and stay occupied during the early days of the coronavirus pandemic — which required her to be “extremely cautious” — Vail downloaded Photoshop and began to play around in the app.

Many of Vail’s pieces feature subjects with insulin pumps.

“I just really liked it. It felt very freeing, and it was the first thing I could do while I was lying in bed and feeling really terrible after a long day and be learning and exploring and getting better,” she recalls. “It didn’t take this level of energy away from me; it kind of gave me energy.”

Weeks of playing around in the app turned into months, and Vail focused hard on building her skills and giving her art a deeper purpose, eventually creating graphics for the National Harm Reduction Coalition.

Later came a project for an organization called Diabaddies, which focuses on supporting women of color fighting diabetes. She drew a woman wearing an insulin pump for a T-shirt design, prompting her to create more art that showcases diabetic subjects.

“Before I had a pump, it was really easy to hide [my diabetes]and I’d be dealing with really intense stuff by myself,” she recalled. “Having my pump now and displaying that — people with pumps show you it’s not an invisible illness or something you can hide away. It’s part of your life, and it doesn’t mean that there’s anything bad about you. It’s just a part of you.”

After meeting others who spoke openly about their struggles with diabetes, Vail wears her own pump with pride and creates art that details subjects wearing pumps or otherwise embracing their diagnosis.

Among her pieces, all created under her Dre Groovy Designs banner, is her Divine Collection, which includes clothing, tote bags and stickers emblazoned with the phrase “Diabetic & Divine” and, more broadly, “Disabled & Divine.”

“Representation isn’t always everything, but if you’re someone who’s making something about a specific thing, you should probably inherently understand it,” she says of blending art and activism. “I feel like my diagnosis has completely influenced my perspective on life, and I feel like your perspective plays out in art.” 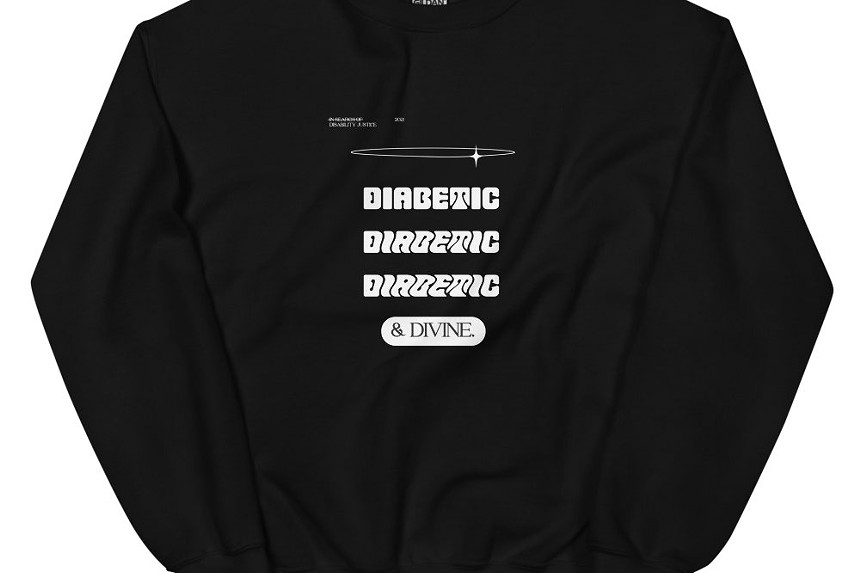 Vail has also found kinship in the diabetic Twitter community, many of whose members have purchased her art, proudly displaying their “Diabetic & Divine” clothing and supporting Vail’s other artistic endeavors.

In the future, she plans to do another harm reduction fundraiser — an annual tradition in memory of a friend who passed away — as well as to keep up with promoting diabetes visibility.

“At the end of the day, I just want to help people who feel the same way I do,” she concluded.

Learn more about Vail and her merchandise on her website.