Veru (VERU -6.96% ) is a bit of an oddball in biotech. It’s developing medicines for breast cancer and treatment-resistant prostate cancer, but it’s also trialing a therapy for severe COVID-19, not to mention making a globally distributed reproductive health product.

And to top it all off, its share price is up by more than 1,000% in the last five years — but much of that growth happened in the last week. With a gain like that, could Veru be a diamond in the rough? Not exactly. But, it’s still a stock that should definitely be of interest to growth investors.

The argument for buying

In my view, there are two reasons that might make Veru’s stock worth buying, and they’re both medicines that could yield a lot of revenue.

First, there’s Entadfi, a recently approved therapy for treating benign prostate hyperplasia (BPH). This year, the company plans to commercialize Entadfi, starting in the first quarter. At its peak revenue, management estimates annual sales of the drug could bring in more than $200 million per year. Realizing even half of that sum would mean more than doubling its trailing-12-month revenue of $60.7 million.

But, Entadfi isn’t what put Veru on the map earlier this month.

That accolade belongs to one of its programs in phase 3 of clinical trials, sabizabulin. Per its April 11 press release, an interim data readout from the sabizabulin trial found that the drug reduced deaths from severe COVID-19 by 55%.

In fact, the early data were so favorable that the clinical trial’s independent oversight committee suggested the trial should be stopped early. And when you’re angling for an Emergency Use Authorization (EUA) from regulators like Veru is, it doesn’t get much better than that.

Just look at what happened to Veru’s total return in the aftermath of the announcement: 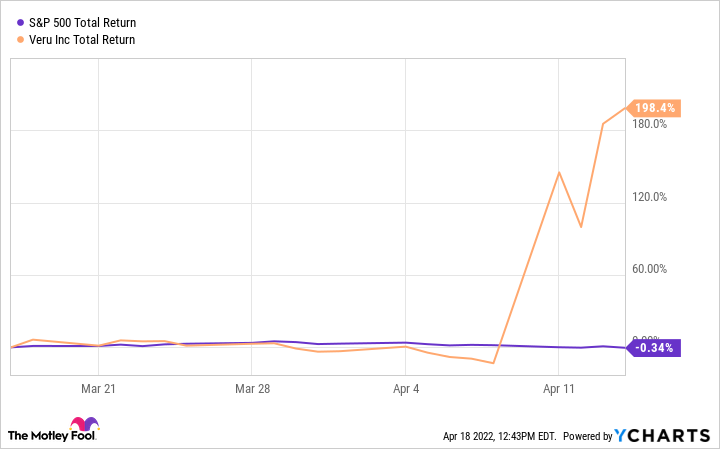 Finally, there’s yet one more reason to buy, and it’s that the company has an evergreen product that provides it with some recurring revenue.

The argument for investing elsewhere

As favorable of a setup as the recent good news about sabizabulin and the expected revenue from sales of Entadfi may be, there are a few things that investors should realize about this stock before taking the plunge.

First, Veru’s situation is very much that of a young biotech stock, despite having more than one product approved for sale and sabizabulin likely on deck. It isn’t profitable, nor will it be profitable anytime soon. 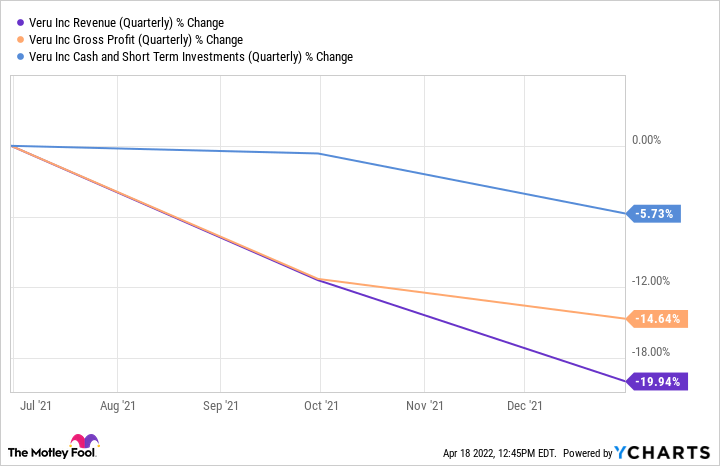 As shown above, its quarterly revenue shrank over the last year, as did its gross profits. Its liquid holdings and short-term investments are still slowly emptying, and it reported a loss of $6.4 million in its fiscal Q1 of 2022.

That means there is quite a bit riding on both Entadfi and sabizabulin.

Regulatory authorities haven’t had a chance to look at the full set of sabizabulin data yet, as the company hasn’t submitted a request for approval yet. Therefore, investors should be especially cautious about the prospects for the drug’s commercialization, as they are not guaranteed. A mishap with regulators — even a minor one — would likely punch a hole in Veru’s stock price.

Furthermore, it’s important to recognize the inflows from Entadfi might not be as significant as management hopes. The current plan is to partner with telemedicine companies like GoodRx to reach the target market of patients with benign prostate hyperplasia. It’s entirely possible that such a move will turn out to be brilliant in retrospect, but for the moment, it looks a bit unorthodox.

Finally, after such a sharp increase in recent weeks, at least a small pullback in its share price is practically inevitable as some investors opt to take profits.

While I don’t plan on buying any shares of Veru, it strikes me as a business that’s likely to gain some more traction over the next year or so on account of its innovative approach to marketing and launching Entadfi, and the revenue the launch will provide.

Though the latest news about sabizabulin is exciting because it would help more people to survive serious cases of COVID-19, it isn’t the only therapy that has a chance of being on the market in the next couple of years targeting that indication. So , while it’ll probably sell well if it gets approved, assuming its commercial success isn’t appropriate just yet.

I’d suggest that people who are usually comfortable investing in small-cap biotechs might want to consider a purchase of Veru shares, as the near-term conditions are quite favorable. Likewise, investors with an average risk tolerance and a hankering for moderate growth could benefit from owning a few shares, though traditional value investors and more risk-averse people should probably look elsewhere.

This article represents the opinion of the writer, who may disagree with the “official” recommendation position of a Motley Fool premium advisory service. We’re motley! Questioning an investing thesis – even one of our own – helps us all think critically about investing and make decisions that help us become smarter, happier, and richer.

Dear Abby: Dinner date urges me not to regain the weight I lost