Fresno State’s eight schools and colleges, along with the Division of Student Affairs and Enrollment Management, each selected an outstanding student to honor as part of the class of 2022 Undergraduate Deans’ Medalists.

The deans selected an undergraduate and graduate medalist based on academic excellence, community involvement and other achievements. Fresno State’s Graduate Deans’ Medalists will be announced later this week.

In mid-May, one medalist from the group below will be announced as the President’s Medalist, the University’s top academic honor for an undergraduate student.

This year’s medalists are:

Sumanjit Gill, of Fresno, earned her BS in computer engineering with a 3.97 GPA. Gill is a Smittcamp Family Honors College Scholar who became fascinated with technology and wanted to find a university that could give her the skills for a career in software engineering. The Lyles College of Engineering helped her learn industry skills through projects related to embedded systems and advanced digital logic design. She was an undergraduate research assistant who worked on securing and optimizing the Internet of Vehicles, an autonomous network of connected vehicles that communicate with one another. She co-authored four publications and presented with her research partner at conferences, symposiums and research competitions. Gill was a Supplemental Instruction leader for the Electrical and Computer Engineering Department and worked with her professor to facilitate weekly activity-based sessions and office hours to support her fellow students. She was also active in student organizations including Society of Women Engineers, the Institute of Electrical and Electronics Engineers, Tau Beta Pi and Eta Kappa Nu. After graduation, Gill will work as a validation engineer at Intel. 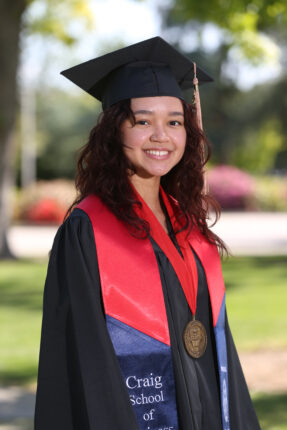 Nevaeh Grubb, of Fresno, earned her BS in business management with a 4.0 GPA in only three years. With her sights set on finishing college as quickly as she could, Grubb successfully made her way through Fresno State on the President’s List for five semesters and excelled in many of her courses. Grubb led a group project for Storyland to prepare a proposal for a new reading room attraction. Her work was so exemplary that her teammates campaigned for her to be awarded extra credit. When the pandemic derailed her study abroad plans in 2020, Grubb applied for the Lyles Center Student Hatchery where she is launching an online women’s sustainable clothing brand that sells a curated mix of vintage clothes and pieces designed by her and made sustainably in Los Angeles. She has a summer internship with OhmConnect, an energy start-up company. She hopes to buy a cargo van in the future, convert it into a tiny home and travel the continent collecting vintage clothing and finding different ways to pursue her passions. 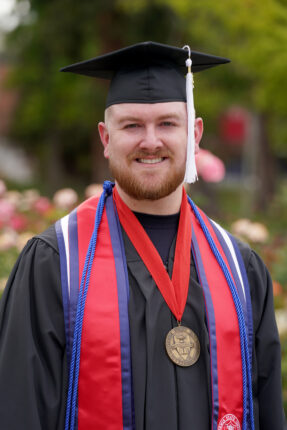 Steven Hensley, of Merced, earned a BA in philosophy, pre-law option, and political science, with a 4.0 GPA. Incarcerated at age 17, Hensley earned college credit while in prison and saw a flyer for Fresno State’s Project Rebound, a program to help formerly incarcerated individuals earn their degrees, which gave him the confidence he needed to apply and earn his degree. He became a student coordinator for Bulldogs for Recovery, a student health and counseling center program concerned with recovery from addiction; co-founded Youngsters for a change, a nonprofit to help at-risk and formerly incarcerated youth; and serves as co-chair of the Fresno County chapter of the American Civil Liberties Union. He was also recently elected to serve a three-year term on the board of directors for the ACLU of Northern California. Hensley wants to help incarcerated youth, those in the LGBTQ community and those who grew up in poverty. He will attend the University of California, Berkeley, School of Law in August. 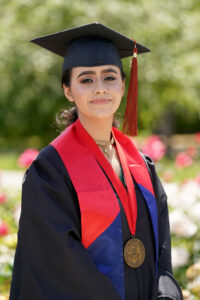 Noorjot Kaur, of Fresno, earned her BA in history with a 4.0 GPA in three years. When her parents’ restaurant fell victim to the Great Recession in 2008, Kaur and her sisters were sent to live in India for several years. She said she had no choice but to do well academically in India and rose to be one of the top five students in each of her grade levels. She continued that strong academic streak when she returned to Fresno, despite not remembering how to speak English, and graduated summa cum laude valedictorian from Bullard High School. She came to Fresno State with the goal of becoming a lawyer after watching a mock trial in high school. She interned at Singh Ahluwalia Immigration Law Firm three days a week while attending classes and working in her parents’ new restaurant. She made the President’s List for three semesters while at Fresno State and was hired by the law firm to work as a legal assistant. She plans to attend law school. 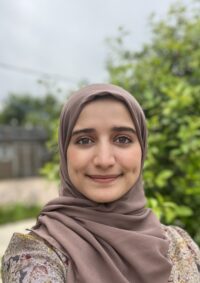 Maram Kiran, of Fresno, earned her BS in biochemistry with a 4.0 GPA. Kiran knows the cultural and language barriers in health care having grown up in an immigrant family from Yemen. Her family’s experiences locally and a visit to a pediatric clinic in Yemen inspired Kiran to pursue medicine in order to bridge the cultural divide and to address health inequities around the world. At Fresno State, Kiran, who is a Smittcamp Honors College Scholar, started a student chapter of Doctors Without Borders to engage the campus community in humanitarian medical work and to promote medical access. She is also a student researcher as part of the Chemistry Honors Program and the Louis Stokes Alliance for Minority Participation. Kiran volunteered in the oncology department at Kaiser Permanente Fresno for 10 months before the pandemic where she discovered that she wanted to be a health advocate for patients while respecting and incorporating their cultural values ​​and practices.

Rebekah Moses, of Firebaugh, earned her BS in health science with a 4.0 GPA. Moses enlisted in the military at age 17 and was in boot camp before her 18th birthday. That year, the 9/11 terrorist attacks made serving the country her priority. She served eight years as a hospital corpsman and earned a several awards, including the Navy and Marine Corps Achievement Award and the Global War on Terrorism Service Medal. After an honorable discharge, Moses started a family and raised four children. She decided it was time to return to college when her youngest was in elementary school. She started at Fresno City College and transferred to Fresno State where she was a participant in the TRiO Student Support Services Veterans program. She was an intern for the Central California Society for the Prevention of Cruelty to Animals and a volunteer in the children’s program at the Church of Jesus Christ of Latter-Day Saints. Moses will National University in the fall to pursue her master’s in public health with a focus in health administration. 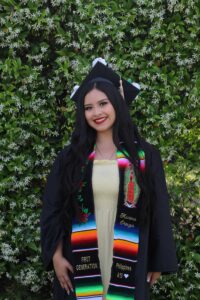 Karina Ortega, of Fresno, earned her BA in social work with a 4.0 GPA. Being a child of Mexican immigrants has given Ortega a nuanced understanding of what many Central Valley families go through. During her sophomore year, she helped execute the first ever First-Generation INSPIRE conference at her alma mater, Edison High School, to promote post-secondary education to families in southwest Fresno. She went through a lot of transitions and losses during the pandemic, and in summer 2021 and into the fall semester Ortega worked with the Social Work Student Association, University President Saúl Jiménez-Sandoval and other departments to organize a mental health initiative to showcase resources on campus. Ortega also volunteered on a voter advocacy drive, migrant donation drive and led a Christmas toy drive for foster children. Ortega would like to get her master’s degree in social work at Fresno State and a pupil personnel services credential so she can become a school social worker. 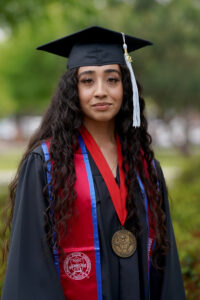 Ivonne Pulido, of Avenal, earned her BA in liberal studies with a 4.0 GPA. Pulido dreamed of becoming a neurologist because of her childhood visits to the doctor for treatment of a noncancerous cyst. But a video she watched in high school with a message to reflect on what you’re good at changed her career path. Taught by her Mexican immigrant parents that an education is a gift, Pulido persevered through school despite moments of struggle because she didn’t understand the work and her Spanish-speaking parents couldn’t help. That experience helped Pulido realize that sharing knowledge is a powerful tool, so she decided to become a teacher. At Fresno State, she found guidance and a community of students with similar stories and backgrounds in the Fresno State Educational Opportunity Program, and she is an officer in the Fresno State Student California Teachers Association. Pulido applied to the Fresno State Evening Campus Cohort to earn a multiple-subject credential with supplementary authorization in math. She plans to pursue a master’s degree in curriculum and instruction or administration. 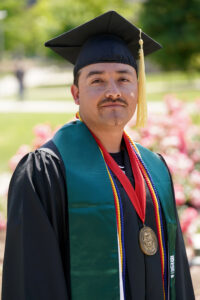 Héctor Jácome-Sáenz, of Salinas, earned his BS in plant science with a 4.0 GPA. He was born in Salinas but raised in Mexico in a house surrounded by cornfields and worked with his family in the fields. He earned his GED and enrolled at Hartnell College to add to his field worker experience. There, Jácome-Sáenz volunteered for a number of agricultural events where he could promote and teach youth about farming. He continued that volunteer work at Fresno State as an ag ambassador and by motivating and mentoring future farmers. He is a recruiting coordinator for the Irrigation Club and a member of the Plant Science Club. He also worked as a research assistant studying plant disease and volunteered on a genetic engineering research project on the navel orange worm. Jácome-Sáenz works at the Kearney Ag Research and Extension Center as a lab assistant and will continue working there after graduation. He has applied for the plant science master’s program at Fresno State and hopes to become a professor.