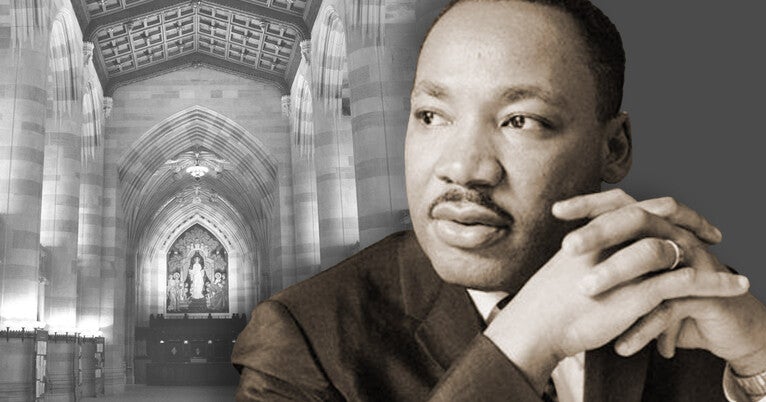 This week the Yale community celebrates the work and legacy of Martin Luther King, Jr. at a fully virtual set of events, including a conversation about the role of race, place, and spirituality in achieving environmental justice; poetic storytelling; Dance show and talk to young people about mental health in families of color.

Events kicked off Thursday evening with a conversation about achieving an environmentally just society, which was part of Yale Peabody’s annual celebration of Dr. Martin Luther King Jr.’s legacy of social and environmental justice, now in its 26th year.

Additional events over the weekend will include virtual discussions that explore how the civil rights icon’s work continues to influence artists, advocates, and thought leaders today.

King’s relations with Yale University go back to 1959, when he spoke of the “future of integration” at the invitation of undergraduates. He returned to campus in 1964 to receive an honorary degree. He was arrested for ordering food in a white-only hotel just two days before his visit to Yale, and his honorary degree from Yale caused some controversy at the time. King’s wife, Coretta Scott King, was appointed Frances Blanchard’s first classmate at Yale in 1969. While on campus, she met the female graduate students and spoke to a sitting-room-only crowd in Woolsey Hall about the importance of campus turmoil in addressing social injustice.

On January 26, Yale University will host another event to honor Dr. King’s legacy, which will feature a keynote address from Majora Carter, a MacArthur fellow and environmental sanitation activist from the South Bronx.

In 2001, Carter founded the sustainable nonprofit South Bronx. Under her leadership, the organization secured approval of a reduction in the green roof tax in New York City, launched one of the nation’s first and most successful training and employment systems, and changed national discourse about the relationship between environmental equality and economic development. She produced and hosted the Peabody Award-winning public radio series, The Promised Land, which highlighted leaders of color in environmental and economic projects across the United States.

The event, which will also take place on Zoom, is co-sponsored by the Yale 2022 MLK Commemoration Planning Committee, the Yale College Dean’s Office, the Office of the Secretary and Vice President for College Life, and the African-American Cultural Center at Yale. . It will be free and open to the public, but registration is required.

The Peabody Museum’s annual Martin Luther King Jr. Day celebration began with a discussion Thursday about how race, place, spirituality and inform each other in creating an environmentally just world. Panelists included Sharon Lewis, executive director of the Connecticut Alliance for Environmental Justice, Bronte Velez, creative director of Lead to Life, and Mesa Tisdale, founder and president of the Mary and Elisa Freeman Center.

The event continued Friday morning with Yara Eichwerich, a Yale University researcher and doctoral candidate, talking about her work on genetic variation in wood frogs and the impact of climate change on species, which can live frozen solid in winter.

On Sunday, January 16, the virtual space created by and for middle and high school students will allow them to connect with their peers to talk about mental health in families of color. The Zoom meeting, co-hosted with educational justice student leaders, will include discussions about mental health, police presence in schools, and King’s legacy. Participants can also join a Spoken Word Workshop hosted by The Word, a literary arts program for young people in New Haven, tutoring artists Taj Galbert and Aaron Jaffris, or a visual arts workshop facilitated by artist Jade Mebrivert.

“The Z Experience Poetry Jam”, featuring poets Cruillot and Ngoma as chairpersons, will begin at 6 p.m. Sunday. This spoken word event will honor Zanet Lewis, founder of the Peabody Museum’s annual MLK Poetry Slam. Guests will listen online for an open mic curated in collaboration. With artists from The Word, followed by a roster of famous poets from across the country, including Lauren Corelli, Robert Gibbons, Bao Fei and Ray Jane.This event is suitable for adults and young adults at the discretion of a parent or guardian.

The Peabody Celebration will conclude on Monday, January 17th with two events. At 10 a.m., New Haven Museum educators will host a morning of family programming to celebrate King and his legacy. Storytellers Joey Donaldson, Alterina Kirkland and Clifton Graves will share fables, anecdotes and stories honoring King’s work, followed by a dance performance and lesson from Mrs. Hanan’s dance and beyond. This will be followed by a kid-friendly drawing activity with Anthony Gilkes, which can be done at home.

Panel Discussion – “Supporting Black Youth in Crisis: What Will Dr. King Say? What Will Dr. King Do?” – Starting at 12:30pm, hosted by the Black Caucus American Library Association – Connecticut Chapter, will consider issues affecting black youth in Society, including the role of mental health and how drugs and violence perpetuate negative behaviour.

Registration is required for all events held on Zoom or can be viewed on the Yale Peabody Museum’s Facebook page and YouTube Channel Live.

The Peabody Museum Celebration is sponsored in partnership with the Connecticut Department of Energy and Environmental Protection and the New Haven Museum.

On February 18, Yale School of the Environment (YSE) will host a virtual celebration of King’s legacy, including a panel discussion and keynote speech by Dorceta Taylor, Professor and Senior Associate Dean for Diversity, Equity and Inclusion at YSE and one of the nation’s leading scholars in the field of environmental justice. The two-hour event, which will begin at 12:30 p.m., will be held on Zoom. Registration is required.

Restorative justice across the African diaspora

On Monday, the Beinecke Rare Book & Manuscript Library will host an online presentation on the semiotics of survivors by Ghanaian sculptor Kwame Akoto Bamvu, founder of the Nkyinkyim Museum in Nohalinia, Ghana. The event, which is part of the Beinecke series “Monday at Beinecke,” will begin at 4 p.m.

Akoto-Bamfo created the first memorial dedicated to the legacy of black slaves, people terrorized by lynching, African Americans humiliated by segregation and Jim Crow, and people of color burdened by contemporary assumptions of guilt and police violence. His monument, known as the Blank Slate Memorial, stands at the entrance to the National Peace and Justice Memorial in Montgomery, Alabama. In 2021, the statue made a tour from Louisville, Kentucky to King Center in Atlanta, among other US stops. Akoto-Bamvu, the 2015 Koenyahia Prize for the Arts (Ghana’s 1st Prize for Contemporary Art), spoke at Benekei Library on Martin Luther King Day in 2020.

A video of last year’s Beinecke Library conversation on Martin Luther King’s Day by W. Jason Miller, professor of literature at North Carolina State University, is available on YouTube. Miller traces Reverend Martin Luther King Jr.’s use of Langston Hughes’ poetry in his sermons from 1956 to 1968.

Check back with Yale News for other event announcements in celebration of Dr. Martin Luther King, Jr..