It might be just as simple as this: One year ago, the Columbus Blue Jackets knew where they were headed, and the Chicago Blackhawks didn’t yet have a clue.

The Blue Jackets were already in the throes of a roster rebuild, having traded captain Nick Foligno and veteran David Savard at the previous season’s trade deadline for first-round draft picks. They knew that defenseman Seth Jones, with one year left on his contract, didn’t intend to sign an extension in Columbus, so he, too, would be traded for futures.

The Blackhawks, meanwhile, were starting to lose patience with their rebuild-on-the-fly and believed they were a couple of key players away from getting back to the Stanley Cup playoffs. Players like Jones don’t become available every day, and GM Stan Bowman was willing to part with part of the club’s future to acquire him.

On July 23, just hours before the first round of the NHL draft, the Blue Jackets traded Jones to Chicago in a blockbuster deal.

It’s that first-round pick either this year or next year that’s in the crosshairs as the May 10 NHL draft lottery draws nearer, because the Blackhawks didn’t come close to making the playoffs this season.

If Chicago, currently with the sixth-worst record, lands the No. 1 or No. 2 pick this season, they keep the pick and will instead send their 2023 pick to the Blue Jackets.

Getting one of the top-two picks this year would certainly give the Blackhawks a chance to draft an elite player, but giving the Blue Jackets their 2023 pick would be a source of much heartburn for the next year.

What if the Blackhawks are just as bad next season? What if they’re worse? What if, pray tell, they won the lottery and lost the NHL’s next generational talent, center Connor Bedard, to the Blue Jackets?

The Blue Jackets, meanwhile, won’t say publicly if they want the Blackhawks’ pick this year pick or next year, even though most scouts have said that the 2023 draft has more high-end talent.

“It doesn’t matter to me; it just doesn’t,” Blue Jackets president of hockey operations John Davidson told The Athletic‘s Front & Nationwide podcast. “If it’s this year, we’ll get a really good player and start developing them a year earlier. If it’s next year, it’s next year.

“My feeling is, it’s a no-lose situation.”

1) What’s at stake in the draft lottery during the final week of the season?

Blackhawks: The Blackhawks may have further depleted their team by trading away Marc-Andre Fleury and Brandon Hagel at the deadline, but their hope was still to remain competitive over the final month and not increase their or the Blue Jackets’ odds at a high draft pick. They haven’t been able to accomplish that, though. They’ve mostly struggled and have gone 5-10-2 since March 21. Depending on how they and the New Jersey Devils close out the season, the Blackhawks could finish with the league’s fifth- or sixth-worst record. That will give them about a 15-18-percent chance of landing the first or second pick and keeping the selection.

Blue Jackets: The Blue Jackets could still move up a spot or down a spot in the NHL’s overall standings, but it seems likely they’ll remain parked with the 12th-worst record in the NHL, making it impossible for them to gain the No. 1 pick in this draft even if they “win” the lottery drawing. Per the league’s rules, teams can move up only 10 spots in the draft order. The Blue Jackets have been holding steady in this neck of the NHL standings for a while now, which is why all eyes in central Ohio have been on that Chicago pick. A raging debate in Columbus is whether you want the Blackhawks’ pick this season or next season. In our recent fan survey, 54 percent of the 1,503 respondents said they wanted the pick this year, which is a little surprising, given how much deeper the high end of next year’s draft is anticipated to be. The fact that Columbus owns the Blackhawks’ pick either this year or next has made it easier for some to accept the Blue Jackets ‘ middle-of-the-road result this season. This orga nization has done plenty of losing through the years, but they refuse to rebuild in the classic sense. The Chicago pick serves as a buffer for a club that finished way out of playoff contention and out of the (realistic) lottery mix, as well.

2) What are the perfect scenarios for each team in the draft lottery?

Blue Jackets: OK, you said “perfect” scenario, so this is the daydream of an ardent Blue Jackets fan. The Blue Jackets “win” the lottery and move up to No. 2 this year. Chicago (really) wins the lottery and moves up to No. 1, meaning they keep the pick this year (hello, Shane Wright) and give the Blue Jackets their first in 2023. If the Blackhawks are truly rebuilding — if Patrick Kane and Jonathan Toews and others are moved this summer — it’s not out of the question that Chicago could be even worse next season, putting them in the Connor Bedard conversation … except that the Bedard pick would go to the Blue Jackets. So, the perfect scenario for Columbus is No. 2 pick this year, and No . 1 next year. But there are several scenarios that, while less than perfect, would be pretty darn good, too. If you listen to the draft experts, next year’s draft has more elite talent, so the Blue Jackets — if they’re being honest — would probably rather have the Blackhawks’ first-round pick in 2023. But if it’s th e third or fourth pick this season, they probably wouldn’t complain.

Blackhawks: The Blackhawks have their eyes set on the 2023 draft, too. They’d be disappointed if they ended up with the first or second selection in this draft and had to hand over their pick next year to Columbus. They’re fully preparing to tank next season to give themselves a shot at Bedard, Matvei Michkov or Adam Fantilli early in the 2023 draft. They see drafting one of those players as the quickest path in their rebuild. As bad as the Blackhawks have been lately, I expect some moves this offseason to make them even worse. I certainly don’t expect them to re-sign Dylan Strome and Dominik Kubalik, who are both restricted free agents and have been playing well as of late.

Now if the Blackhawks did land a top-two pick this year and had to forfeit next year’s pick, they’ll likely take a different approach to the 2022-23 season. They won’t be as motivated to tank. They’d likely sign a more proven goalie to keep them somewhat afloat in the standings next season. They feel like they’ve already helped the Blue Jackets out enough with the initial trade and don’t want to also walk them into a superstar.

3) Has Seth Jones lived up to the expectations of being a No. 1 defenseman?

This answer is tricky. There have been times where Jones has looked and played like a really good defenseman and other times where he hasn’t.

He would probably agree with that, too. This is what he said on Wednesday, “I had some good moments in the year and had some not-so-great moments, I think. I hit the 50-point mark the other day, but my plus-minus has got to be better for the team overall defensively in some areas. Five goals isn’t good enough for me. I obviously have put a lot of pressure on myself to be the best player I can be. Try to put myself in more opportunities. Watched a lot of video this summer in how I can be better in those areas and be that player that this team needs me to be.”

Is he a true No. 1 defenseman? That’s hard to say. There are aspects of the game that fit that criteria, but not all. Of course, there are other elements to the equation. Part of it is being supported by your teammates, especially your defense partner. Jones bounced around partners this season and didn’t find anyone he really clicked with. Riley Stillman was the only partner he had with an expected-goals percentage close to 50 percent that he spent more than 100 minutes with, according to to Natural Stat Trick. The Blackhawks’ struggles as a team definitely figure into this. Overall, Jones understands he has to provide more, though.

4) What is Adam Boqvist’s career trajectory after this season?

No question, Adam Boqvist’s career trajectory is pointed sharply north. He has tremendous offensive instincts, is eager to join the rush and is one of the best finishers on the Blue Jackets’ roster. With 11 goals this season, he’s tied for 15th among NHL defensemen in scoring, but he’s played fewer minutes (17:03 per game) and has a higher shooting percentage (17.2 percent) than anybody else on the list. Have we mentioned that he doesn’t turn 22 until mid-August? The Blue Jackets want Boqvist to get a little bigger and a lot stronger, because he does get manhandled too often in puck battles and he does seem to get injured frequently. They also hope that more experience will bring more reliable play in his own zone. As good as Boqvist has been at times this season, he hasn’t really found a permanent fit in the top four playing alongside Zach Werenski or Vladislav Gavrikov. But there are elements to his game that suggest a very bright future. 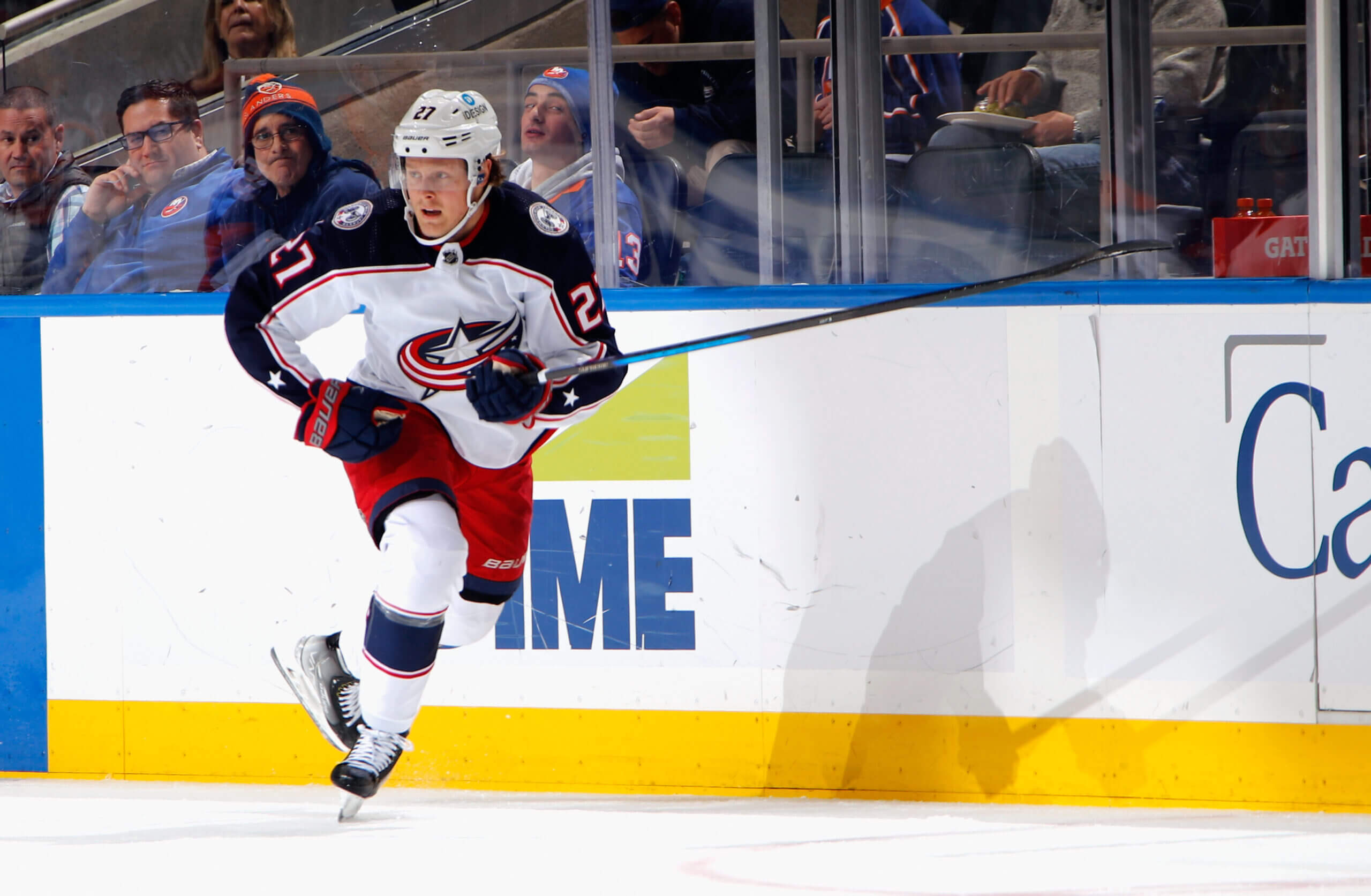 5) What does Cole Sillnger’s potential look like at this point?

Cole Sillinger was such a huge part of this trade for the Blue Jackets. The Blackhawks rushed to get Jones’ contract extension done before the draft because Columbus desperately wanted the Blackhawks’ No. 12 pick, hoping Sillinger would still be on the board. Even on draft day, there were whispers that Sillinger had the body and the maturity to play in the NHL as an 18-year-old, and that’s exactly what happened. He was the youngest player in the league this season, and his 15-15 -30 in 77 games was more than respectable. What coach Brad Larsen most appreciated, however, was Sillinger’s ability to play away from the puck and his willingness to compete. He sure has the look of a top-six center, one whose offensive game hasn’t yet reached its full potential.

6) How do the Blackhawks and Blue Jackets feel about the trade after a season?

Blackhawks: This trade may haunt the Blackhawks for some time. It’s not even about acquiring Jones. He may end up being what they need as a defenseman. It’s just the price they paid for him. The only way this trade would have looked OK for the Blackhawks is if they made the playoffs this season, and they obviously didn’t come anywhere near that. It was a massively poor gamble by Bowman. He’s gone now and new general manager Kyle Davidson has to clean up his mess. It’s a lot harder to clean up too without likely their 2022 first-round pick. It’s going to be a handful of years before the Blackhawks can even think about competing again.

Blue Jackets: They’re over the moon about this trade. The Blue Jackets will always think highly of Jones, not just his incredible skill set but the way he handled his exit from Columbus. So nobody wants to disparage him. But this trade, along with moving Foligno and Savard at last season’s trade deadline for first-round picks, should be seen as a major early step in their “restart.” In Sillinger and Boqvist, the Blue Jackets have two lineup regulars for potentially years to come. They also added defenseman Jake Bean in a trade for the second-round pick from Chicago. And the big prize might still be out there, depending on how the NHL lottery shakes down on May 10. The Jones trade created a HUGE hole on the right side of the Blue Jackets’ defense, and that won’t be easy to fill. But this trade has been a boon for Columbus, so far, and it could be the gift that keeps on giving.